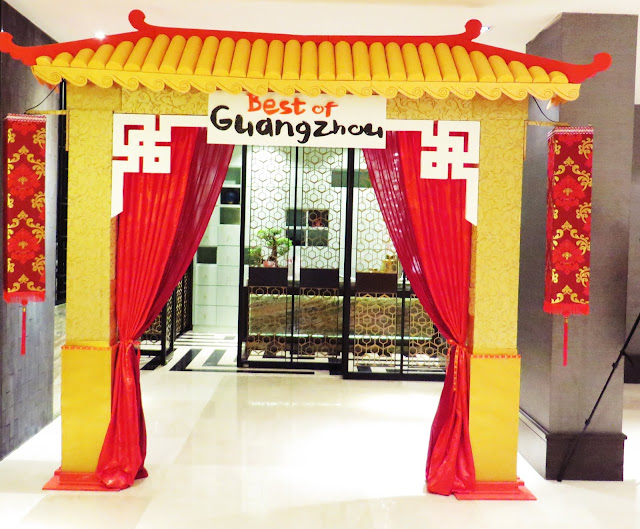 For the next two weeks, chefs Guo Deigo and Liao Jin Shuang from Hilton Guangzhou have taken over the kitchen at Toh Yuen in Hilton Petaling Jaya. They bring with them years of experience in China’s Cantonese cuisine. Guangzhou is said to be the birthplace of Cantonese cuisine, one of China’s top four cuisines.
According to the duo, Cantonese cuisine is characterised by ching (clear) flavours, depending largely on the four seasons for choice of ingredients. Unfortunately, they add, some of the seasonal ingredients are not available over here in Malaysia, so they have to use close substitutes.
Our little media group start with two appetisers. There’s Guava In Plum Sauce (RM28), reminiscent of how we eat crunchy, freshly cut guava with a sprinkle of sour plum powder. But I prefer the guava here which has a softer texture and the plum sauce is not heavily laced with salt.
Chinese Burdock Yam With Mango Sauce (RM38) is definitely a first for me as it’s usually made into soup or braised. The fingers of snow-white burdock root are mild in flavour and slightly slimy in texture.
The chefs offer three types of soup; we have Braised Shredded Roasted Duck, Bamboo Shoot & Mushroom Soup (RM38). I am surprised that the soup has been thickened instead of the light variety.
There are nine main dishes in the Guangzhou menu. My favourite has to be Smoked Hainanese Chicken with Dragon Well Green Tea Flavour (RM88/half; RM138/whole).  The free range chicken is first braised and then smoked with Dragon Well (longjing) green tea. Then a sauce infused with tea leaves is poured over it and crispy, deepfried tea leaves sprinkled on top.
Scallop & Shrimp-Squid paste (RM88/8pcs) is enveloped with kataifi pastry and deepfried to a crisp, golden brown. The sweet juiciness of the seafood is most appetising.
I far prefer this to Deepfried Seafood Roll In Rice Paper (RM58/8pcs). Looking like sausages, the seafood rolls are breaded and deepfried, a cooking method that the two chefs seem to favour.
However, the taste of seafood is a bit lost as the finely chopped prawn and scallop are combined with chopped celery, carrot and mayonnaise.
Seafood seems to be the forte of the two chefs and naturally, we get a taste of Guangzhou’s famous squirrel-shaped fish. Deepfried Mandarin Fish Flower In Sweet And Sour Sauce (RM33/100g) is easy to eat. Deboned (which makes it great for young ones) and scored, the process of deepfrying results in a fillet that’s pretty as a picture. The sweet and sour sauce, I’m happy to note, does not threaten to overwhelm the sweetness of the fish.
In contrast, Braised Fish Head With Garlic & Tofu (RM68) in claypot is not recommended for families with small children. Not only does the song yue have a slight muddy flavour but it also has plenty of fine, Y-shaped bones that can cause a nasty stuck-in-the-throat incident if you’re distracted momentarily.
The flavour of the sauce, perked up with whole cloves of garlic, sliced ginger and a small dose of finely chopped chilli, is delicious though.
Supreme Stirfried Assorted Seafood Rice (RM48) is another dish I cannot get enough of. Not only is it not oily but it has big chunks of fresh, crunchy prawn, bits of dried scallop, chopped squid ball and scallions which come together in a riot of flavours. A generous scoop of tobiko (flying fish roe) on top gives it an added oomph.
Dessert is  Pumpkin, Taro & Barley In Claypot (RM38), a poor cousin of our local bubur cha cha. Mango Coconut Milk Sweet Soup (RM18) with small cubes of fresh mango added, is more like a drink. No wonder it is served in a tall cocktail glass. Sadly, I would have gladly given both a miss.
phoenixbee@gmail.com