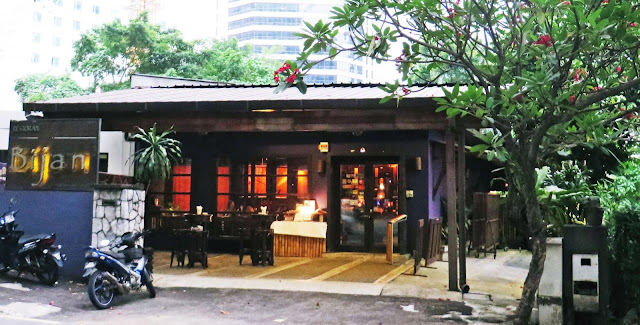 While other establishments are touting Kampung Cuisine, Mum’s Cooking or Royal Repast, Bijan’s chefs are going back to their roots and keeping the restaurant’s buffet theme as Simply Malay. But there’s nothing simple about that; in fact, the two words say volumes. Head chef Razis and his assistant, Chef Ujang, wants to showcase hearty Malay recipes that “warms the soul”.
There will be 3 rotating menus but some items are so significant, they will be offered daily. These include Kelantanese-style bubur lambuk, satay and ulam-ulam with various sambal.
Diners will be offered a refreshing drink of freshly squeezed calamansi juice to start.
At a sneak preview of what to expect, we nibble on appetisers such as corn fritters, keropok lekur, deepfried mushroom, getuk ubi (tapioca cutlets) which has a sweetish taste. Then it’s on to the salads. Gado-gado is popular, with the requisite peanut gravy. The grilled squid kerabu and jackfruit kerabu are my top picks for flavour, texture and the piquant lime dressing.
For a meaty start, there’s papaya and smoked beef kerabu. Or just have raw ulam-ulam with dips including sambal belacan, budu, cincaluk, air asam, sambal kicap, sambal tumis, sambal penyet and the very delectable sambal hitam that is a Bijan specialty.

Don’t miss the Satay Station, with skewers of beef, tripe, lung, chicken as well as prawn and sotong. The skewers are well marinated and frankly, you don’t need the peanut gravy to go with it. Here’s where you can get some yummy otak-otak Muar and pais ikan (spiced fish in banana leaf parcels).
Next to this, the Carving Station has an impressive display of a giant snapper, ayam golek and smoked beef tongue. On other days, you can expect roasted leg of lamb, smoked striploin.
I always enjoy a bowl of noodles and there will be either northern soup noodles, curry laksa and laksa Negeri, which is served with strips of smoked beef. It’s a delicious bowlful. Those who don’t take beef can still have the noodles without this as the laksa stock is vegetarian based.
The hot mains beckon. Rendang is a must and there will be rendang tok, rendang daging hijau and rendang kambing, on rotation. I am enamoured of the sotong masak hitam, with the black-as-night dish of squid cooked in its own ink to give it that distinct flavour and aroma.
Ayam kampung limau purut is a light dish scented with the citrusy aroma of shredded kaffir lime leaves. In contrast, the udang masak lemak nenas is sweetly fruity from the addition of sliced pineapple.
All these demand a helping of rice and there will be a choice of plain rice or nasi minyak.
After the satisfying dinner, my eyes are attracted to the display of colourful Malay pastries such as kuih kosui, egg jelly, kuih bingka, kuih talam, kuih lapis and serimuka.
There are also fresh cut fruit and individual saucers and glasses filled with mango pudding, sago gula Melaka and banana puree. Finally, the ais kacang corner is filled with all kinds of condiments, from attap seeds and jelly to cincau, red bean and peanuts.
Prefer something hot? Pick parcels of pulut inti and labok sago from the steamer or have puteri mandi and green pea broth.

Special for readers:
Use this promo code  PHOENIXBEE/BSM19 and get Buy 5 Free 1