All set for the Lunar New Year 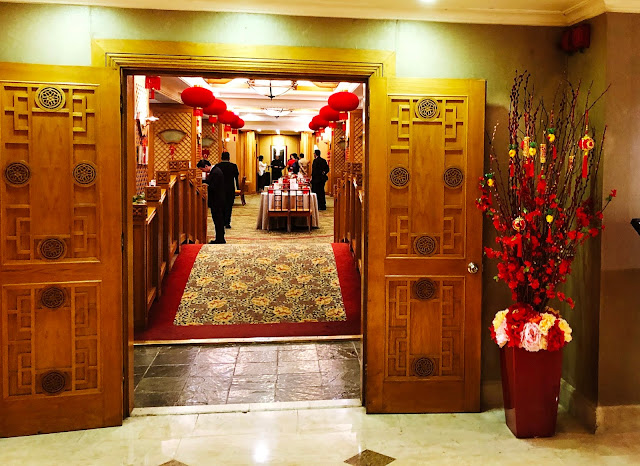 Chef Bryan Teh has been collecting gold. Last year, the Executive Chef at The Emperor Chinese Restaurant has picked up a Gold Medal (Shanghai International Top Chefs Invitation Competition), Gold With Distinction Medal (2019 Malaysia world Elite Chefs Championship for Individual Hot Dish), Gold Medal (2019 Asian Culinary Exchange Competition, Japan).
Now, he has turned his attention to designing a yummy feast  to welcome the Year of The Rat. At a recent sampling, our media group is excited at the thought of what’s to come.

Naturally we start with yee sang (from RM68++). The Emperor has five varieties to choose from, such as Jelly Fish & Fresh Fruit, Salmon & Korean Pear, Baby Abalone & Korean Pear, Soft Shell Crab and Korean Pear and our pick of Japanese-style Crispy Fish Skin & Salmon.
While salmon is a common ingredient, adding crispy fish skin gives a different texture to the dish. We also asked for traditional plum sauce instead of Japanese wasabi sauce.

We tease our palate further with Maksutake Mushroom Soup, double-boiled with bamboo pith and free-range farm chicken. This is followed by Roasted Chicken With Sweet Corn & Butter. I’m not a fan of chicken but this dish is so aromatic. There’s a riot of flavours from the buttered corn kernels and the marinade which includes five-spice powder.

This year, Chef Bryan's choice of fish is Mandarin Fish. Our group is so busy catching up that the dish turned cold but surprisingly, the flesh of the steamed mandarin fish is sweet and tasty, without a hint of that fishy smell. Perhaps it’s Chef Bryan’s superior soya sauce that does the trick.

Wokfried Tiger Prawn requires a little work and diners are provided with fork and knife for removing the shell. The dark sauce is amazing, both forbidding and beckoning at the same time. It’s so yummy I suck the shells clean. The sauce is also a perfect companion for the softly sautéed shredded onions under the prawns.

Our next dish is a combination of auspicious ingredients. There’s Black Mushroom braised with semi-dried oyster, gluten and fatt choi.

While the last dish of rice is usually the least popular as most diners would have had their fill by now, Bryan’s Steamed Rice With Smoked Duck gets the thumbs-up all around. Steamed together, the aroma of smoked duck penetrates deeply each grain of brown rice and glutinous rice. Using a combination of the two grains is also an inspired touch. While the brown rice tempers the “heaviness” of glutinous rice, the latter lends its al dente stickiness that makes each spoonful a symphony in textures. Bryan has also cleverly added to the dish some turkey ham and shitake mushrooms, so finely minced that diners will not quite notice their presence but yet, the two ingredients inject a subtle aroma that boosts instead of overpowers that of the smoked duck.