I can’t really say if this is sang nyuk mian (fresh pork noodles) is authentic because I’ve not tried the ones in Sabah. Apparently, this is an iconic Sabah dish that originated from Tawau and made popular by Kedai Kopi Kim Hing Lee in Kota Kinabalu.

Sang Nyuk Mian comes in two styles: Soup or korn lou (noodles tossed in a dark sauce) and bits of pork lard croutons are added on top to give it the oomph factor.

My Best Friend and I had actually planned to lunch at Restoran Yat Yeh Hing in People’s Park where the Kee Kee Bentong Chicken Rice is totally irresistible. Unfortunately, a large number of people had the same idea and the coffee shop was practically overflowing with customers.
So we did the next best thing: Turn around and stop at SK Sabah Pork Noodles which was previously known as Ah Loy Sabah Pork Noodles. 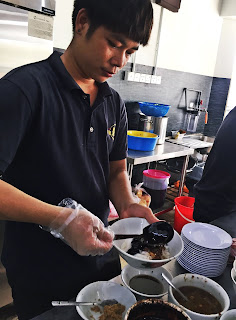 The action station is right in front of the shop, so you can see what’s cooking. I am pleased that the workers handling the food are wearing plastic gloves.
The owner, SK Choo, is from Sabah, so I am trusting this is authentic sang nyuk mian, done the right way.
The menu is simple, a one page affair with accompanying pictures. The standard (RM8) is pork noodles with Chinese mustard leaves, sliced fresh tenderloin, intestine, liver and pork balls. Customers can add on items such as kidney and tendons. Unlike the KL pork noodle, This Sabah version of pork noodle does not use minced pork.
There’s a choice of noodles too, from vermicelli and kway teow to mee and fresh Hakka mian. Since it’s the restaurant signature, I pick korn lou Hakka mian which comes with a side bowl of soup with vegetables and other condiments, including chilli sauce.
The noodles are delicious. With the right amount of sauce and perfectly cooked to retain that al dente texture. But I don’t like the chilli sauce and ask for chopped chilli padi instead.
The broth has a rich porky taste, probably from hours of simmering pork bones. The sliced tenderloin is silky smooth and tender. The intestine is soft and tender while the slivers of liver are cooked just right.
The soup noodles are just as good but I’m giving the dry version an extra thumbs-up.
We also ordered for Century Egg Dumplings. I would have preferred more of the century egg in the meat filling but I guess at RM2.50 per piece, that’s probably just right. 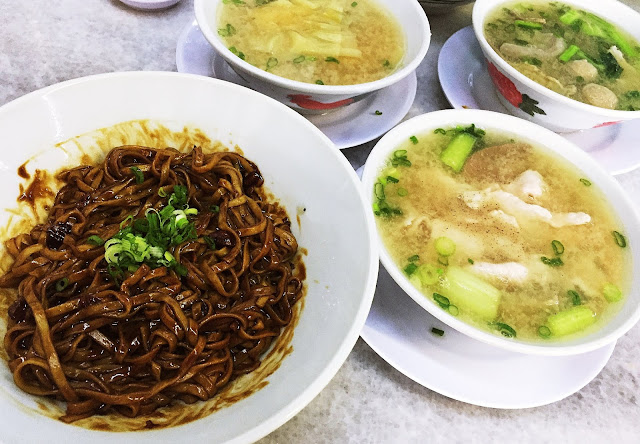 Opening Hours
Daily: 8am to 9pm