I’ve yet to visit Sarawak but what I saw at the recent unveiling of the new Visit Sarawak Year logo at JW Marriott Hotel in Kuala Lumpur, on October 16 has got me all excited. It’s now definitely on my bucket list of places to visit.
Doing the honours was Sarawak Minister of Tourism, Arts, Culture, Youth & Sports, Datuk Haji Abdul Karim Rahman Hamzah.

Earlier, Sarawak Tourism Board CEO Sharzede Haji Datu Salleh Askor said the logo, the anchor emblem for the Visit Sarawak Year campaign, is designed to connote fun and friendliness with the word Sarawak spelt out in stylised script. The letter “a” in the centre has been replaced with an illustration of a hornbill as Sarawak is known as Bumi Kenyalang or Land Of The Hornbill. The bird is also an important symbol of good luck for the indigenous people of Sarawak.
The colours red and yellow represent the State flag, orange for a strong spirit and vibrant energy of the various ethnic communities, shades of green for its verdant rainforests and wildlife while blues represent its long coastline and the calm ocean.
The Sarawak Tourism Board also plans to position the State as a plethora of Culture, Adventure, Nature, Food and Festivals not found anywhere else in the world; hence the tagline, as in Sarawak, there’s always “More To Discover”.
Also spotted at the event were members of the media and trade representatives who were treated to dance and cultural performances as well as a special appearance by Sarawakian singer Dayang Nurfaizah.
Sarawak is home to 27 ethnic groups speaking 45 languages and dialects. Each has its own stories, culture, traditions and beliefs which add up to make Sarawak a cultural hotpot. These include the Iban tribe which continues to maintain its many customs and rituals although the people’s former reputation as head hunters is now firmly a page in history.
Then there’s Orang Ulu or People From Upriver. Orang Ulu is used to loosely describe a collection of diverse tribes such as Kayan, Kenyah, Lun Bawang and Kelabit which speak different dialects and have different cultural practices.
Datuk Haji Abdul Karim says there’s always so much happening in Sarawak, especially for adventure seekers who can go jungle trekking, caving, mountain climbing, jungle expeditions or go for watersports such as diving, fishing, water-skiing and sailing.
Or go back to Nature. While Sarawak has 56 totally protected areas, there are 37 gazetted national parks, 5 wildlife sanctuaries and 14 nature reserves. These are home to an amazing number of flora and fauna, including hornbill, orang utan, proboscis monkey and the world’s largest and smelliest flower, the Rafflesia.
Its Mulu National Park is Malaysia’s only gazetted natural built park in the UNESCO World Heritage Site listings while Paleolithic and Neolithic burial sites from 40,000 years ago have been uncovered in its Niah National Park.
City slickers can admire the varied architecture and go shopping for (or even learn) the arts and crafts that Sarawak is famous for. The Orang Ulu are skilled in beadwork and the Iban in cloth weaving. The Melanau and Bidayuh are good at utilising bamboo, rattan and tree bark to weave baskets, hats and mats.
Festivals… Sarawak’s calendar is filled with festivals of both culture and music. Cultural festivals include the Gawai Harvest Festival, Kaul which is celebrated by the Melanau fishing community, Borneo Cultural Festival and Pesta Meow, a feline celebration in Kuching that lures cat lovers. As for music, apart from the world renowned Rainforest Music Festival, there’s Borneo Jazz and the Kuching Waterfront Jazz Festival.
Finally, the one thing to rule them all: Food. 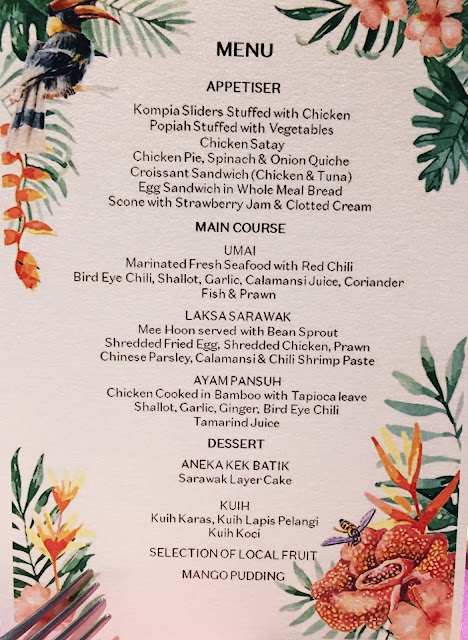 Since it was tea time, guests at the event were given a tantalising tasting of the foods of Sarawak, from kompia sliders and umai to manok pansuh and Sarawak laksa. Umai is raw seafood marinated with calamansi juice, shallots and chilli padi while manok pansuh is chicken cooked in bamboo with tapioca leaves, shallots, garlic, ginger, tamarind and chilli padi.
Sarawak laksa is totally different from what is available in the peninsula and the late Anthony Bourdain called it “breakfast of the gods”.
More information at sarawaktourism.com