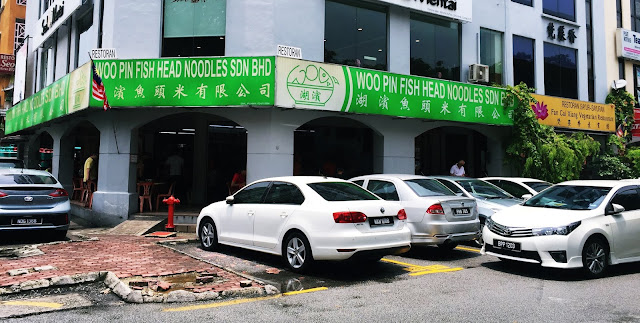 Recently, after attending a wake in Nirvana, My Best Friend and I drove around aimlessly and ended up in Taman Danau Desa, somewhere off Old Klang Road.
Our sharp eyes spot an open-air restaurant that is packed. “Must be good food,” says MBF. Luckily, we manage to snag a parking lot nearby as the area seems filled with cars.
Woo Pin Fish Head Noodles Sdn Bhd is a no-frills eatery that has been around for years and I am told there are now a few branches in the Klang Valley. 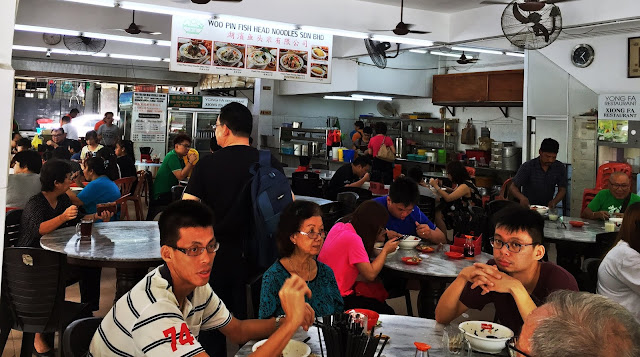 It’s housed in a corner shoplot and the 3-sided apple-green signboard that hugs the perimeter of the shop is hard to miss. Inside, you’ll find the menu literally on the wall, with pictures acting as a visual guide to the undecided. But most customers seem to know exactly what they want.
It’s not too difficult, given that Woo Pin offers a very basic menu of Fried/Fresh Fish Head Noodles, Fish Paste Noodles, Fish Paste Soup, Fried/Fresh Fish Head Soup at RM11 (small) and RM13 (big). There’s also Prawn Noodles (market price).
I find the fish paste, made with threadfin fish, a tad on the coarse side, a clue that this is definitely house-made, instead of the commercial variety. Woo Pin uses song yue, a fresh water fish that’s prized for its head. The meatier part of the body has a lot of small Y-shaped bones typical of river fish, so do be careful. Eat slowly and you’ll appreciate how sweet the flesh is.
Customers can also choose between rice vermicelli (bihun) or yee mee (fried wheat noodles). The vermicelli used is neither the thin, stringy type nor the thick, fat type. It’s sort of an in-between thickness with a smooth texture and yet, it manages to soak up the flavours of the soup.
Haven’t tried the yee mee as I am not too fond of this deepfried noodle.
There are two soup variants – clear or creamy. Though both types are delicious, I still prefer the creamy soup best. It is flavoursome and the addition of evaporated milk gives it a richer edge.
Both soups are cooked with fish bones, wedges of tomato and chopped salted mustard which adds a slightly tangy flavour. Before serving, a sprinkle of browned onions is scattered on top although personally, I’d fancy pork lard croutons would have given it better flavour.
The noodles are served with Penang-style sambal belacan (oh, yes!) or sliced fresh chilli padi.
For side dishes, there’s Fried Fish Cake and Fried Stuffed Foo Chuk (RM7 each or RM13 for a combination of both). There’s nothing particularly noteworthy about the Fish Cake but the Foo Chuk is stuffed with fish paste that has a definite bounce in the bite. Served with a sweet chilli sauce and two slices of cucumber.
We ordered this so that we’d have something to nibble on while waiting for the noodles but service at Woo Pin is quick and the noodles actually arrive before the sides.
As for drinks, there’s the usual array of drinks you can get in a kopitiam, such as coffee, tea, soft drinks and fruit juices. What I like about the ginkgo barley (RM2.50) is that it’s cooked in soya bean milk and has real ginkgo in it. There’s also 3 Layer Tea/Coffee (RM3.80).